This work is based around the life of Nella Last, who was a housewife that lived throughout her whole life in Barrow-in-Furness, Lancashire, England. She wrote a diary for the Mass Observation Archive from 1939 until 1966 making it one of the most substantial diaries held by Mass Observation Archive. An edited version of the diary she wrote during World War II was originally published in 1981 as Nella Last’s War: A Mother’s Diary, 1939-45 and republished as Nella Last’s War. Although other books were published covering her postwar years, her wartime diary inspires this film.

Her published writing describes what it was like for ordinary people to live through World War Two, reporting on the bombing of Barrow in April 1941, which included her own home and offers her reflections on a wide range of contemporary issues. The book itself comprises of a series of diary entries.

This film is inspired by the book and provides a snapshot of her concerns for her sons, those fighting overseas and of the worries of those left behind to live as ordinary a life as possible, given the circumstances through which they were living. The book is still available to this day and I commend the book to anyone interested in War history.

On Tuesday 28th March 2017, photographers, Graham Franklin, Julie Morrison, Brett Aspinall and Shaun McAllister held a seminar to discuss the effects of the Anthropocene, as we move into a new epoch of global change. The seminar allowed each photographer the opportunity to share their explorations and discoveries, together with their collaborative ideas for display and dissemination of their work.

Following the success of the seminar an exhibition followed from 12th April to 28th April 2017 at the PR1 Gallery, Preston.

The opening event, held on the 12th April 2017, from 4pm onwards saw 30 to 40 members of the public in attendance during the 2-hour opening of the show, and feedback from the visitors was positive. The show consisted of a diverse range of exhibits, in the form of prints, photographs, artefacts and film, promoting four areas studied.

Graham Franklin’s work at Sheddon Clough is a response to a landscape, which has evolved from an area that was heavily industrialised over hundreds of years into an area returning back to nature.

His work consisted of three large black and white photographic prints, artifacts pertaining to the production of Lime and a film containing drone footage of the area.

Julie Morrison explores a site at Widnes that was once a popular territory for fishermen and industrial workers of the community in the 1800’s, a place where the boundaries of the space, test the limitations of its surroundings, where over pollution and neglect interfere with its natural history. 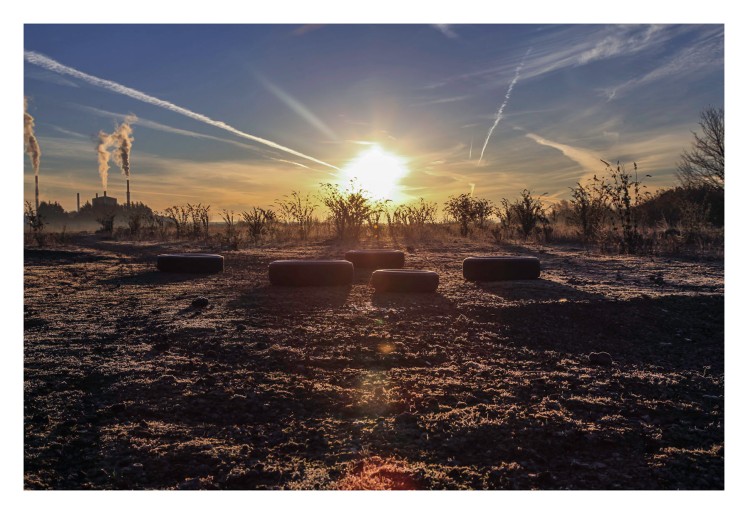 Her work consisted of four photographic prints and artefacts from the site. 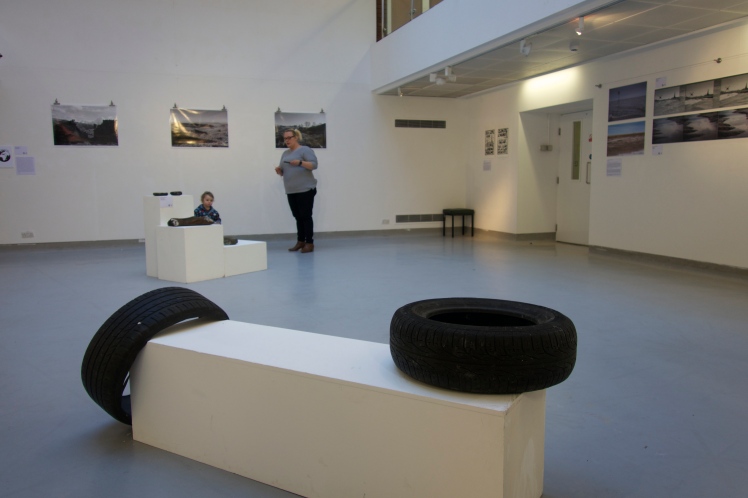 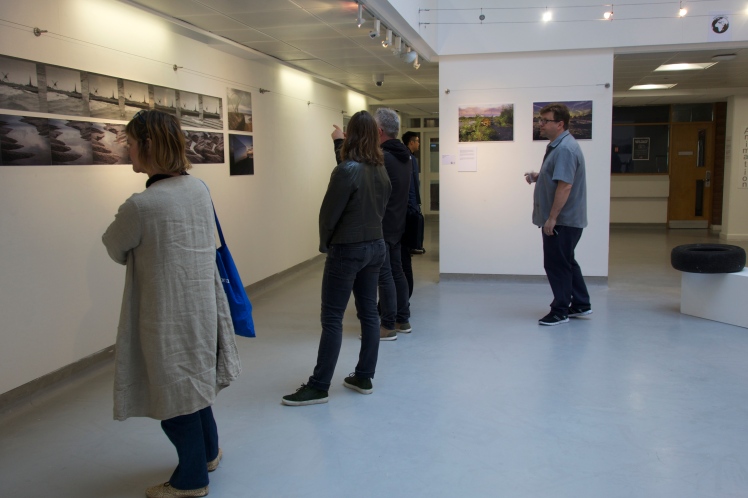 Brett Aspinall provided a photographic response, which is suggestive of the cyclical nature of environmental change, where the beach at Lytham is given over to a vast expanse of salt marsh, created by the dredging of the River Ribble.

His work consisted of a series of photographic prints of the area, together with two lino cut prints 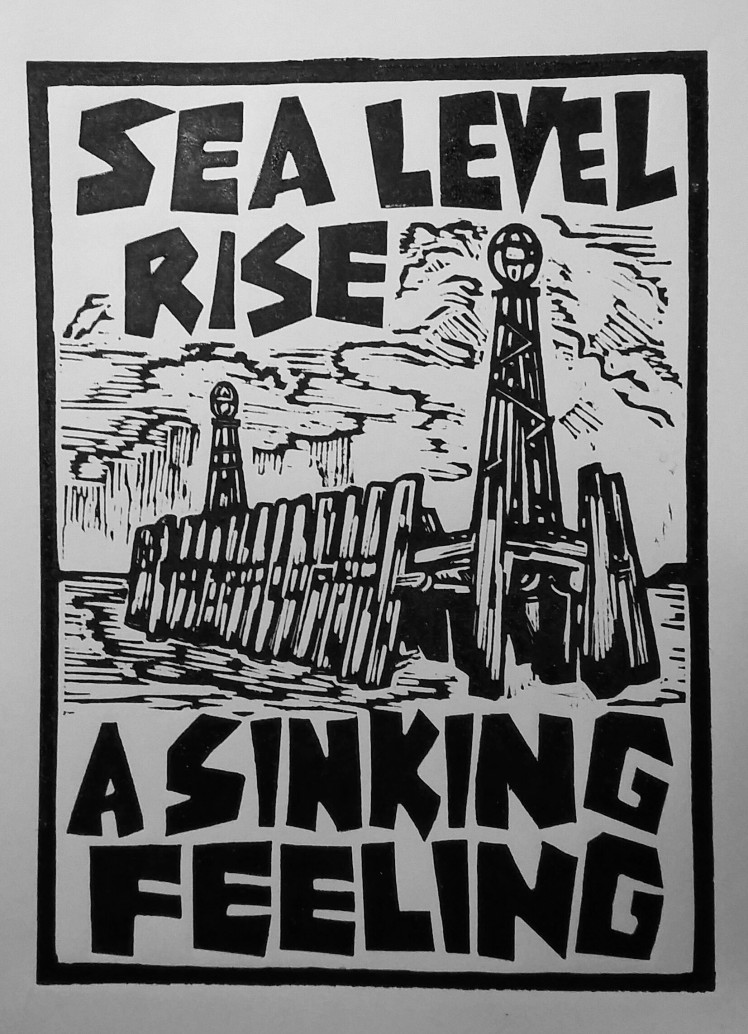 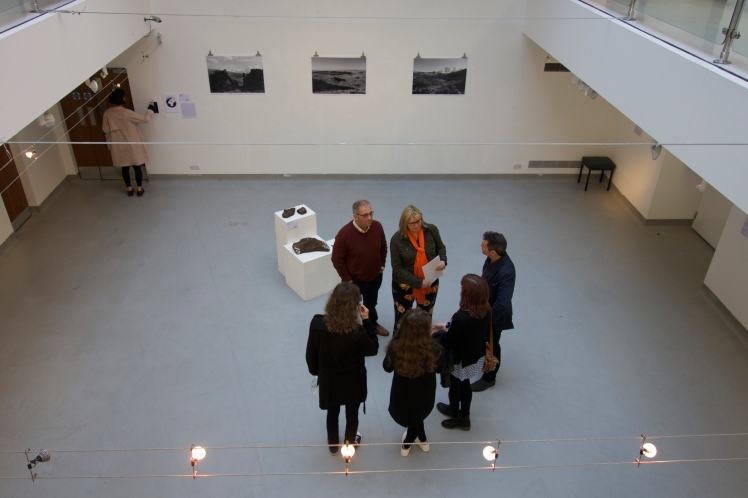 Shaun McAllister’s work examined the district of Mill Hill, Blackburn, Lancashire, considering the Industrial landscape, rivers and roads that make up the boundary of its territory and its geographical location which is defined by it’s own rail links to the north, and the Leeds and Liverpool canal system to the south. 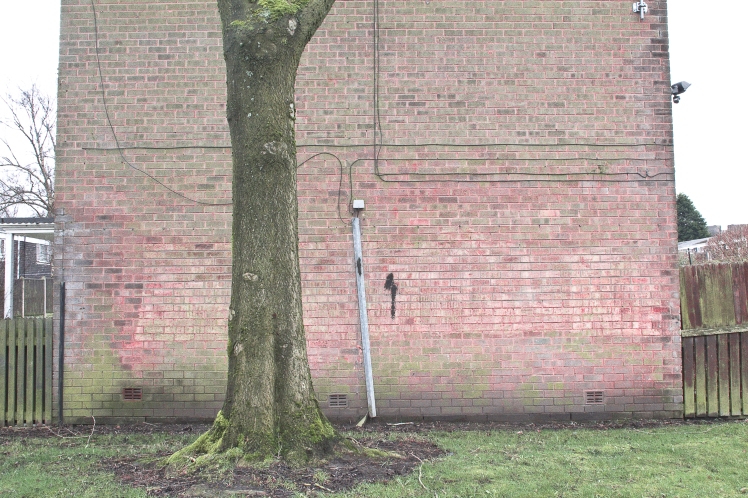 His work consisted of a series of photographic prints that set out to try and answer what is it that keeps people tied to this place without the need to ever move away. 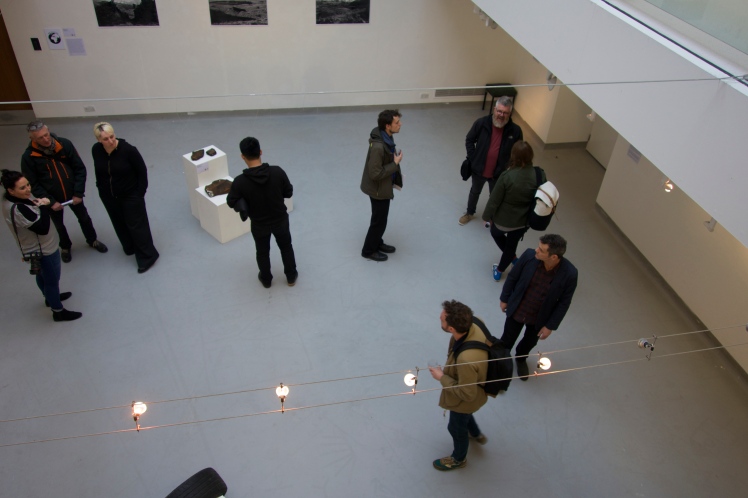 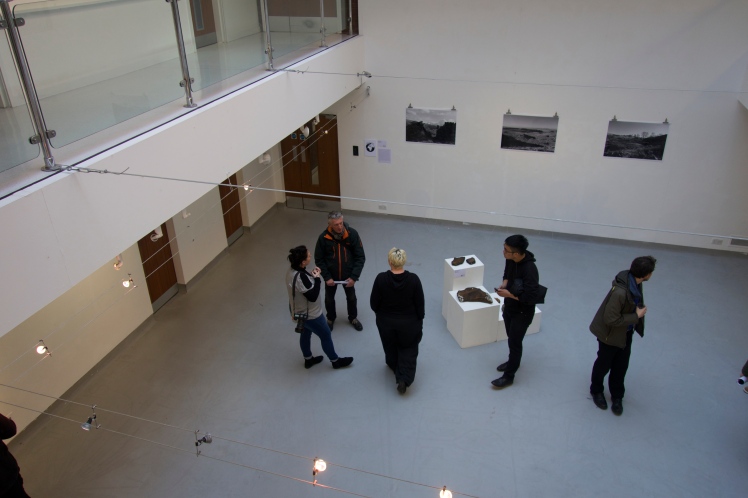 Following the success of the opening, support for the group has been on the rise, with continued feedback from onlookers. The group has continued to promote the show and is gaining a following on social media, with many positive comments, and they hope to deliver fresh insights to their collective work in the near future. 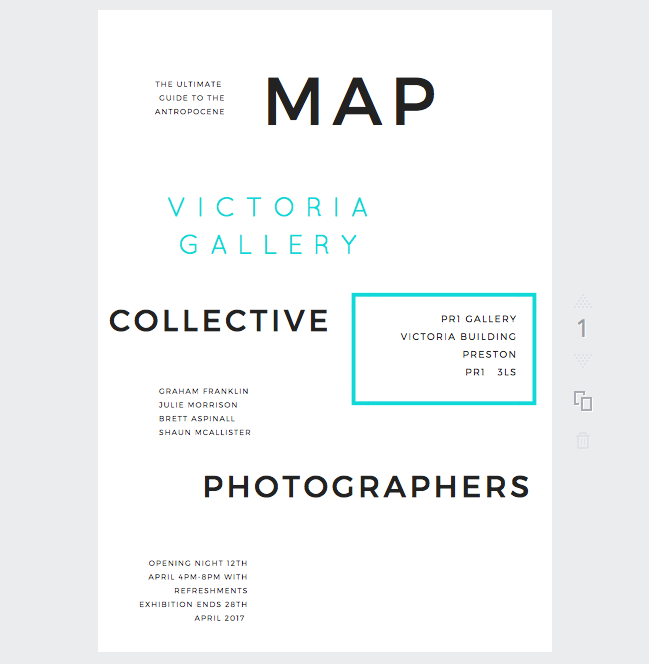 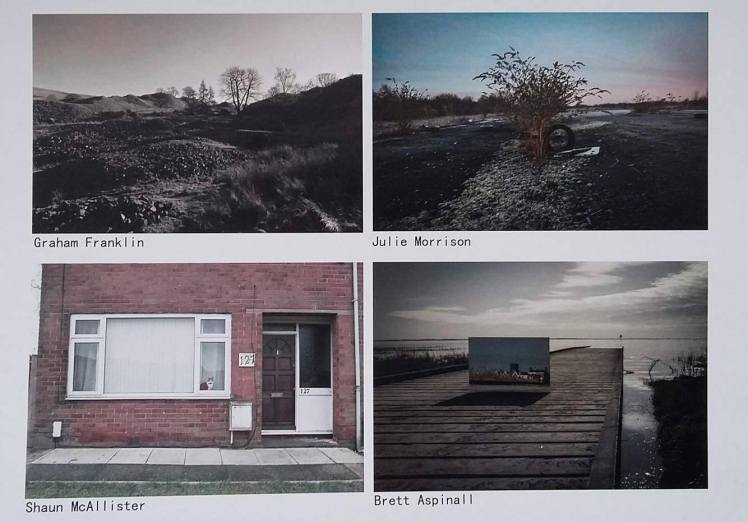 The area that I am currently studying is situated on Sheddon Clough, which leads on to Worsthorne Moor and is part of what was the 40,000-acre Towneley estate above Burnley. The Lancashire Council promotes the area as a place of natural interest and features in their visitor’s guide, which a gives a clear indication of its relevance as a nature reserve, reclaimed by nature from its heavy industrialised usage. The land is now owned by United Utilities for the purpose of water collection and storage for human consumption, and outdoor enthusiasts use the area, with several walks leading up to the reservoirs and across the moors. Today the lunar landscape that remains is a fascinating reminder of a largely forgotten industry, which saw considerable usage over the last 500 years, mainly through the extraction of Grit stone and Limestone, with the latter leaving the predominant feature of the landscape, however the impact of this forgotten industry still remains. G S Franklin

Earlier this week I was involved in a discussion relating to age discrimination of the so called ‘middle aged’ within the jobs market. There seemed to be a general recognition that age discriminati…

Earlier this week I was involved in a discussion relating to age discrimination of the so called ‘middle aged’ within the jobs market. There seemed to be a general recognition that age discrimination does indeed still prevail, particularly within the mid 50’s age group, where the individual concerned may have decided to make a career change, or for some reason has been laid off. This subject interested me, being ‘middle aged’ myself, I had decided to sell my business and return to University in order to study for a Bachelors Degree. Having since entered a Master’s program, which, by the time I complete I shall be the ripe old age of 57, at which point, should I decide to look for employment, this subject becomes a worry.

The purpose of re-education is to keep individuals ahead of the game with respect of the technological advances within the workplace, to keep their skills relevant to current practices and to increase their employability.

Education however comes at a cost. Students currently receive finance in the form of a loan from Student Finance England, which is available to anyone up to and including the age of 60, for the purpose of paying the educational fees related to Bachelors and Masters Degrees within higher education. These fees on average total £46000, becoming repayable once the individual earns in excess of £21,000 per annum, and remaining applicable for 30 years after graduation. This is a large enough problem for the young, but for the mature student it is a decision that should not be taken lightly.

A cursory view on the Internet reveals some disturbing figures and many websites share glum reports of age discrimination within the work place. Figures suggest that a third of the total UK workforce is placed in the 50 – 64 age group, however, of those who find themselves out of work at the age of 55, half of them remain out of work for 12 months or more, and a considerable percentage never return to work before the state pension age. This seems rather an odd situation when the government has deemed it necessary to extend the state pension retirement age to 67 years, and raises the question of choices proffered to the mature student. Although the government has done much to increase the employability of the ‘middle aged’, the system seems to have proffered a choice between playing Russian roulette on the jobs market, and continuing in full time education by applying for PHD funding, neither of which will diminish the debt to the Tax Payer.

American research suggests that age discrimination towards the white middle age male surpasses that of women, the disabled and ethnic minorities; subjects that seem to be the flavour of the month. This raises the question of legalities and further suggests that age discrimination is very hard to prove. It is a situation that does not augur well for the future career prospects of the mature student, or of their ability to repay the student fees. The problem is compounded by the fact that as a mature student, having not paid into the ‘system’ for the previous 2 years, they are unable to claim any form of unemployment benefit, regardless of previous payments, unless they happen to qualify for the means tested benefit.

It is clear that some form of discrimination exists at all levels within society, or there would not be Laws in place to counteract this. The Student Rail Card for example, is a clear indication that education is seen as being available only to the young, as it is clearly aimed at the predetermined age group of 16 – 25 year olds. This card however is available to all full time students regardless of their age, and further indicates a lack of education within the national rail network. Education, as I have previously indicated is the key to continued employability of a candidate within the jobs market. However, education comes in many forms not necessarily delivered through the educational institutions, but is always delivered through a desire for knowledge and of its sharing, without such creates a situation where discrimination remains the preserve of the ignorant. I myself shall remain a perpetual student.

This is the home page’s excerpt Source: Home